It’s always impressive when old technology stands the test of time more than 100 years after it first appeared. This is the case with my favorite pastime, ham radio, where software and data streams are now as common as the spark-gap transmitters and cat-whisker coils of the early twentieth century.

Even in this whiz-bang digital age, ham radio has kept pace. Popular digital modes (FT-8 is the runaway success) co-exist with traditional voice modes and even Morse code. Still true to its mission, ham radio fosters international friendship, remains on the forefront of technology and perhaps most importantly, assists during disasters.

The International Amateur Radio Union (IARU)  is the world body that oversees and promotes ham radio. IARU estimates there are about three million licensed hams in the world, 700,000 of them in the United States alone. Japan, Thailand and China are the next most ham-populated nations, followed by Germany which is in fifth place, but ahead of other European countries.

Here in the states, California, the most populated, has over 13 percent of the nation’s licensed hams – that’s more than 115,000 operators! Texas ranks second with seven percent, and Florida is third with four percent. No matter how you slice it, that's a lot of RF, and under our new and improved band conditions, it shows. 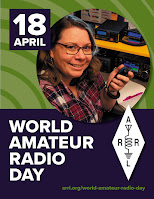 Each April 18th, ham radio is celebrated during World Amateur Radio Day, sponsored by the IARU, a world agency that oversees and promotes amateur radio to underscore its benefits. IARU also defends the ham spectrum from intrusion and tries to mitigate interference in each of the world's three ITU regions.

The Roc-Ham Radio Network of Rochester, NY will be conducting a special event station with callsign W2W, available on EchoLink and the All Star Network (conference #531091).

In addition, the TenTec Legacy Net will operate on 80, 40 and 20 meters on April 18th. Certificates will be issued to stations that are confirmed in Netlogger and a "clean sweep" award will go to those who make contact on all three bands.

Pete Miller
I have an eclectic set of interests centering around non-fiction writing, radio broadcasting, journalism, public safety and ham radio, with politics tossed in for good measure.